2000: President Clinton vetoes a bill that would allow storage at Yucca Mountain.

2001: In February, Bechtel SAIC Corp. is hired as the chief management contractor for Yucca Mountain. Later in the year, the EPA presents its Yucca Mountain high-level waste standard (40 CFR 197). The group Public Citizen along with the State of Nevada file several lawsuits against the EPA, the DOE, and the NRC in an effort to discontinue the Yucca Mountain project. 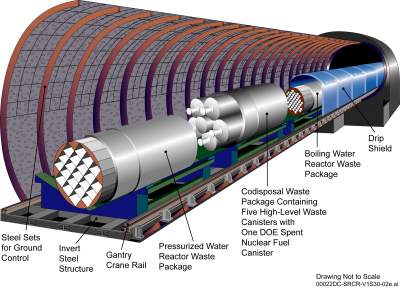 2003: In May, COGEMA, Inc. is awarded a contract to design material-handling systems for the Yucca Mountain Project. In November, the Nuclear Waste Technical Review Board releases a report detailing corrosion concerns related to high temperature and humidity in the proposed repository. They recommend further research and tests to determine the risks related to their concerns.

2004: The U.S. Court of Appeals for the District of Columbia Circuit rejects all challenges to the Yucca Mountain site recommendation. The court also upholds contention that the EPA did not follow the advice of the National Academy of Science concerning the time period for assessing compliance with safety standards, as required by the Energy Policy Act of 1992. As a result, the EPA must reevaluate its compliance rules, and the NRC also has to reissue its licensing rules.

2005: The DOE discovers emails that indicate the U.S. Geological Survey may have falsified quality assurance work on Yucca Mountain. Later that year, the Western Shoshone file a federal lawsuit against the Yucca Mountain Project. They cite the 1863 Treaty of Ruby Valley in an attempt to prove the Shoshone never actually intended for their lands to be given to the U.S. Government.

2009: Energy Secretary Steven Chu announces in a Senate hearing that Yucca Mountain is effectively off the table as an option for nuclear waste storage.

2010: In January, The Blue Ribbon Commission on America’s Nuclear Future is formed by the Obama administration to review processes and recommend new strategies for nuclear waste management. Later in the year, funding is eliminated for the Yucca Mountain Project in President Obama’s budget for 2011, and the DOE notifies the Nuclear Regulatory Commission of its intention to withdraw Yucca Mountain’s license application.

2012: The Blue Ribbon Commission submits its final report, recommending that Congress create a new organization to manage the disposal of spent nuclear fuel, and suggests a consent-based approach to siting nuclear waste facilities.

2013: The DOE issues Strategy for the Management and Disposal of Used Nuclear Fuel and High-Level Radioactive Waste, which is a response to the Blue Ribbon Commission’s recommendations. The report suggests storage at an interim facility by 2021. In May, the fee imposed on nuclear energy customers that supported the nuclear waste fund is terminated.

2014: The NRC releases a report that deems Yucca Mountain a suitable location for the storage of nuclear waste.

2016 – The DOE announces the implementation of a consent-based siting process for a nuclear waste repository, per the Blue Ribbon Commission’s 2012 recommendations.