1954: The Atomic Energy Act of 1954 is passed, leading to the development of a civilian nuclear industry. It also calls for the exchange of nuclear technology with other nations. In spring of 1954, U.S. bomb test Bravo in the Pacific dusts a nearby Japanese fishing vessel with nuclear fallout, sickening the fishermen and dampening worldwide enthusiasm for Eisenhower’s “Atoms for Peace” plan.

1955: The USS Nautilus is completed; it is the world’s first nuclear powered submarine, lauded by AEC Chairman Gordon Dean as the first practical non-explosives use of nuclear power.

1957: “Report on Disposal of Radioactive Waste on Land” is published by the National Academy of Sciences - National Research Council Division of Earth Sciences, Committee on Waste Disposal. They describe disposal in salt as “the most promising method for the near future.” In July of 1957, the International Atomic Energy Agency (IAEA) is formed in an effort to promote peaceful uses of nuclear energy worldwide.

1958: Shippingport Atomic Power Station is opened in Pennsylvania. Designed by Westinghouse Electric Corporation, it is the first full-scale nuclear power station dedicated to the peaceful use of nuclear power. 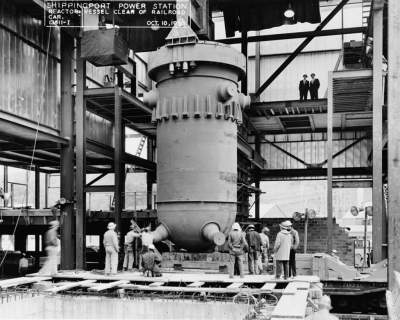 The reactor vessel for the Shippingport Power Station.

1960: The U.S. begins a program to develop a nuclear waste repository in an abandoned salt mine in Lyons, Kansas. The AEC begins conducting studies there in 1961; it is eventually ruled out as on option in the early 1970s after significant public opposition and concerns over mining in the area.

1963: A limited test ban treaty is signed by the U.S. and the Soviet Union, ending atmospheric testing of nuclear weapons.

1964: U.S. President Lyndon B. Johnson signs into law the Private Ownership of Special Nuclear Materials Act. The Act allows private nuclear power companies to own their own enriched uranium, without having to lease it from the government.