1939: Albert Einstein, along with physicist Leo Szilard, compose a letter to U.S. President Franklin D. Roosevelt, alerting him to research with uranium that could conceivably lead to the creation of a powerful bomb. In response, Roosevelt forms the Advisory Committee on Uranium. The Committee eventually advises the U.S. to fund research into fission chain reactions.

1940: In an effort to reorganize the Advisory Committee on Uranium into a scientific body and to free the group from dependence on military funding, the National Defense Research Committee (NDRC) is formed. Also in 1940, President Roosevelt establishes the Las Vegas Bombing and Gunnery Range, which is eventually called the Nellis Range.

1941: In the Radiation Lab (Rad Lab) at the University of California in Berkeley, scientists discover neptunium, which is created when uranium-238 captures a neutron and decays. The decaying of neptunium results in the creation of plutonium-239, which is found to be more likely to lead to fission than uranium.

1942: Fermi, now at the University of Chicago, achieves the first self-sustaining nuclear chain reaction to create plutonium out of a uranium pile. Also in 1942, the U.S. officially begins work on the atomic bomb. The project is named after the location of its headquarters in the Manhattan Engineer District, commonly known as the Manhattan Project. Oak Ridge, Tennessee, is selected as a site for production of uranium for the Manhattan Project.

1943: Los Alamos National Laboratory in New Mexico is established as part of the Manhattan Project to design and build an atomic bomb, and General Leslie Groves officially endorses Hanford in Washington State as a site for plutonium production. 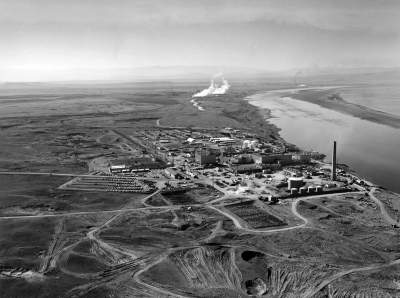 The Hanford Site in Washington State.

1945: Los Alamos receives its first shipment of plutonium from Hanford in February of 1945; on July 16, the Trinity nuclear weapons test is conducted by Los Alamos as part of the Manhattan Project in the Jornada del Muerto desert in New Mexico. A few weeks later, the U.S. drops nuclear bombs on the Japanese cities of Hiroshima and Nagasaki, ending World War II.

1946: The Atomic Energy Commission (AEC) is created through the Atomic Energy Act of 1946. It is formed with a dual purpose – to foster development of nuclear technologies and also regulate nuclear proliferation and industry.

1948: After years of nuclear tests at Enewetak atoll, the U.S. begins looking for a permanent continental test site for nuclear weapons. The area now known as the Nevada Test Site is eventually chosen; its first nuclear test occurs in 1951.

1949: A U.S. Air Force unit detects a radioactive mass over the Pacific Ocean, indicating the successful detonation of a Soviet nuclear device.

1950: Niels Bohr, Nobel Prize winner for his work on the structure of atoms and previously involved in the British and American joint atomic energy project, publishes his Open Letter to the United Nations, expressing concern about nuclear proliferation and international tensions, while also urging "free mutual information and intercourse" of scientific information.

1951: A group of engineers from the Argonne National Laboratory successfully produce a small amount of electricity from a fast breeder nuclear reactor.

1952: The Rad Lab at Livermore (now the Lawrence Livermore National Laboratory) formally begins operations as a branch of the University of California Radiation Laboratory; scientists from the Rad Lab test their hydrogen bomb at Enewetak atoll in November of that year.