1982: The Nuclear Waste Policy Act of 1982 (NWPA) gives the DOE authority to investigate potential geologic high-level radioactive waste sites, and establishes the DOE Office of Civilian Radioactive Waste Management. Under this act, utilities producing spent nuclear fuel have the option to transfer ownership of spent fuel to the federal government, who will ultimately dispose of it in a permanent geologic repository. The act also states that the federal government is required to take title of the spent fuel by 1998 - the projected completion date of the repository. In November, Richard H. Bryan, a vocal critic of radioactive waste disposal in his home state of Nevada, is elected governor.

1983: The U.S. Department of Energy identifies nine potentially acceptable sites for nuclear waste disposal, six in the West and three in the South. NRC issues high-level waste regulations, (10 CFR 60). In the summer of 1983, the Nye County Board of Commissioners establishes a program to assess and monitor Yucca Mountain project activities. The program is officially named the Nuclear Waste Project Office in 1987. 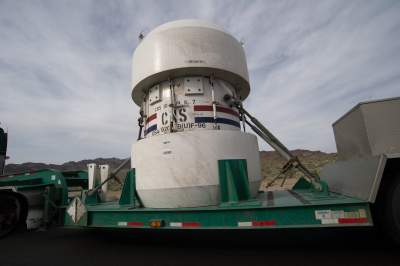 A nuclear waste container sits on a rail car outside of the Nevada Test Site.

1984: The DOE issues its site selection guidelines for a geologic repository (10 CFR 960). DOE scientist Jerry Szymanski discovers calcium carbonate deposits in study trenches dug around Yucca Mountain that he believes are the result of upwelling water. Szymanski argues that his findings should disqualify Yucca Mountain from consideration based on the DOE's site selection guidelines. The National Research Council later publishes an extensive study in 1992 refuting his claims, titled "Ground Water at Yucca Mountain: How High Can it Rise?"

1986: In April, a combination of design flaws and human error contribute to the Chernobyl disaster in the Ukraine. A month later, the U.S. Department of Energy selects three sites as candidates for a geologic nuclear waste site, and indefinitely defers the search for a second site.